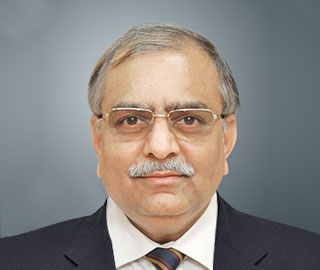 He has a rich, more than four-decade long career in L&T and has been instrumental in growing the nascent Technology and Product Development Group of L&T’s corporate R&D with a focus on top end inter-disciplinary Product Development.

Mr. Patil spearheaded the company’s foray in the Defence sector since the inception of this segment in L&T in the mid-eighties; a decade and a half ahead of the opening up of Defence Production for participation by Private Companies in 2001 (licensing it in 2002). He led the development efforts for realisation of weapon delivery systems for DRDO and for the Indian Navy. Over the years, under his leadership, L&T built a portfolio of indigenous, in-house products, systems, technologies and platforms both on its own and by teaming up with DRDO and the Indian Armed Forces, and is today engaged in design-to-delivery of solutions across its chosen Defence segments.

He also oversees L&T’s Space business and provided leadership to its position as the longest and most mature industry partner of ISRO (spanning five decades) towards development of special test facilities, such as Hypersonic Wind tunnel, high-altitude shock tunnel, ultra-precision angular motion simulators, range instrumentation like Precision Instrumentation Grade Radars, Deep Space Communication Facilities, etc. Under his leadership, L&T contributed to ISRO building strategic material independence, besides being a development partner and serial production partner for main lift-off Solid Booster stage through the entire range of Space Launch Vehicles, including SSLV under development. The relationship with ISRO matured to include a host of other hardware such as payload heat shields & deck panels in advanced composites, solar array deployment devices, interstages, etc.

He also oversees the Smart Cities, Safe Cities and Communication business with a focus on making our cities Smart and Safe. In this sector L&T has emerged as the largest Indian player with a series of success stories such as Prayagraj Kumbh mela, Odisha coastal storm warning system, and transforming 26 major cities of India into smart cities.

He is President of Society of Indian Defence Manufacturers – a unique society representing Indian Defence Manufacturers with a focus on indigenising the Defence Sector, and was founder Vice President of SIDM, set up under the aegis of the CII.  He is a member of the CII National Committee, Chairs the CII committee on Strategic Manufacturing and a member of Associations Council of CII. He also serves on the PMA – India Managing Committee.  Earlier he served as Member of Steering Committee, National Executive Committee and Chairman Defence & Aerospace Committee of FICCI.

He has been conferred an Honorary Fellowship by Indian National Academy of Engineering (INAE) and the Project Management Associates (India), and has been honoured by IIT Bombay with the prestigious Distinguished Alumnus Award in the Diamond Jubilee Year of the Institute. He has also been conferred an Honorary Membership by Indian Institute of Metals (IIM).